Skip to content
June 26, 2017January 22, 2018 Simone Pinto
Someone recently asked me why I hadn’t written about football yet. Football has always been very close to my heart. I remember walking in on my dad watching the game and ended up staying there, glued to my seat for the whole game. I was mesmerized by the sport and that is when I knew I loved it. I have two favourites, Manchester United and Spain. Two very different teams in two very different levels. I made it a point to catch up on every single game that I could.
But just watching the sport wasn’t enough anymore. I wanted to play the sport as well. Unfortunately, a female football fan wasn’t a common thing for most people. The fact that I supported it made a lot of people uneasy.
Everyone in my family is a football fanatic. But me and my aunt bond the most when it comes to football. We are friendly rivals and avid football fans. When the Indian Super League was announced me and my aunt were beyond excited and attended all Mumbai and other team games as well. We even ended up going to the finals. Apart from this we’ve also made it a point to watch the Euros and World Cup together. Especially when the teams we support play against each other.
I’ve always been asked if I like football for the players, and have often been called a plastic fan as well. None of which have discouraged me but makes me wonder if it’s because I’m a girl. But that’s not how it works. I’ve come across many men who don’t know as much about football as me and my aunt. Football has always been about Passion, Emotion and Dedication. It’s about having fun. Football shouldn’t be a debate on Male or Female fans. It should be about bringing people together. People who love and enjoy the sport. 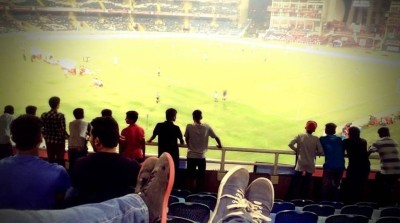 I love Football. Do you?

8 thoughts on “My Take on Football”