I’ve been on trips around the country, but I’d never really gone beyond. This trip took months of planning and was long overdue. 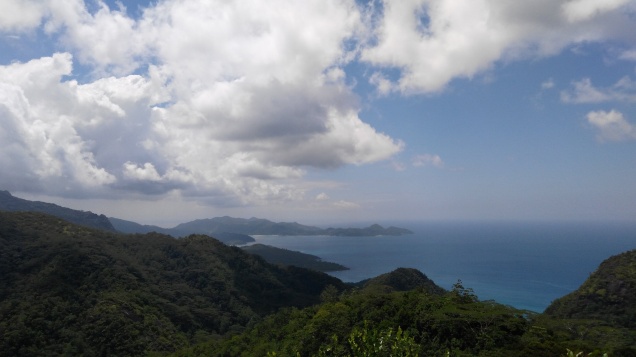 Seychelles, officially the Republic of Seychelles, is an island nation located in the Indian Ocean. It consists of 115 islands majority of which are inhabited, with many dedicated as nature reserves. Winter is during July and August; the average temperature is 24 °C (75 °F).  The most pleasant time of the year from May to November. Monsoons last from November to February, making December to April their Summers. Temperatures are at an all-time high from March to April, making them the hottest months.

After 3 hours 30 minutes on a plane from Mumbai, an unpleasant overnight stay at the Abu Dhabi International Airport and another 4 hours 20 minutes, we finally landed at the Seychelles International Airport, located on the biggest island, Mahé. I’ve never seen an airport with a view like this one. The airport is situated right next to the sea. I wouldn’t lie when I say I thought we’d land in the ocean. A 30-minute ride later we were in Bon Vallon, a bay on the north-east western coast of Mahé. We were staying at The Berjaya Bon Vallon, one of three best hotels at Bon Vallon. With most of our day wasted, we had an early dinner and went to bed early.

We woke up early the next day and went to grab some breakfast. We wanted to get an early start and explore the island. There are two ways to explore any new place: with the locals, or by yourself. We decided to go on an 8-hour tour of the island, leaving no place unexplored. We started off by visiting the capital of Mahé, Victoria. Having first being established as the seat of the British colonial government it is situated on the north-eastern side of Mahé. The city is filled with attractions and happened to visit a few. We visited the Arul Mihu Navasakthi Vinayagar Temple, built in 1992 is the only Hindu temple in Seychelles. We also visited the Cathedral of Our Lady of Immaculate Conception, built in 1874 recalls the French colonial style. And like the tourists that we are, we also ended up exploring the colourful Sir Selwyn Clarke Market, built in 1840 sells spices, fruits, art, and souvenirs.

From there, we made our way to Eden Islands, an artificial island 3.5 km from Victoria. The island was created in 2000 and belongs to the Mahé Port Islands. It thrives on tourism and Eden Bleu is its main attraction. We then visited the Grann Kaz, a traditional house still in perfect condition. Depicting the simplicity and charm of the Creole life, consisting of a large sitting room, a dining room, 3 bedrooms and a surrounding veranda, offering visitors a perfect blend of modern Seychellois spirit and the island’s English and French heritage.

We then started making our way down south, driving around on long, narrow roads with trees and civilization surrounding us. Our first beach is Anse Royale, one of the largest bays on Mahé. After a quick photography session, we made our way to Baie Lazare, an administrative district named after the pirate Lazare Picault. He first set foot on 21st November 1942, a monument known as the ‘Anchor’ to commemorate the historical moment inaugurated in November 1992. Having concluded our tour, we made our way back to Bon Vallon, taking the scenic route overlooking the whole island. We had an early dinner and went to bed earlier than the night before.

We ended up going on another tour the next day, but this time we knew where we were going. We started out by visiting the ruins of Venn’s Town, now a heritage site where Missionaries ran a school for liberated Africans landing in Seychelles after 1861. The ruins are a reminder of Seychelles’ role in the campaign to stamp out the slave trade in the region following the removal of slavery in 1834. After exploring for a bit, we then made our way down south to a beach a friend of mine highly recommended. She claimed it was the most beautiful beach she had ever seen, and rightly so. Anse Intendance, a well-known wild beach in the south of Mahé. Framed on each side by granite formations makes this white sandy beach breathtaking. On our way back, we paid the Sir Selwyn Clarke Market another visit to shop some more. Another early dinner later, we dressed up for a night at the bar at Berjaya.

We spent our last day in Seychelles on a glass bottom boat, allowing us to explore amazing corals and fishes. Another tour, this time by the sea, let us take in the beauty of nearby islands. We fed some zebrafishes and decided to stop at Long Island, which is when we spotted 3 baby sharks loitering around the shore. After a short stroll around the island, we were on our way to another island for lunch. Moyenne Island, a small island in the Ste Anne Marine National Park off the north coast of Mahé has been a flora and fauna reserve since the 1970s. Purchased by Brendon Grimshaw, was abandoned from 1915 to 1970. Grimshaw was the only inhabitant of the island until his death in July 2012. Currently, a national park is only accessible as a part of organized trips. We concluded the tour at Eden Island 5 hours later.

I was glad our journey back was on a direct flight to Mumbai. Seychelles has so much to offer apart from clear waters and blue skies. Hiking trails, nature reserves, great food and so much more. Its numerous islands make it the best destination to explore. It was the perfect destination for my first international trip! What was yours?